With concerns about a downtown alley resolved, the Ann Arbor City Council cleared the way Monday for McKinley to continue its revitalization of the Liberty and Division streets corridor in the city's midtown area.

The council unanimously voted to approve a rezoning of a 1.15-acre site at 515 E. Liberty St. where McKinley wants to tear down a vacant one-story building that used to hold National City Bank and replace it with a two-story building. The council also approved the site plan and development agreement.

McKinley proposes to put retail all along Liberty Street from its McKinley Towne Centre eastward to the Michigan Theater. Some business owners on Monday said that was key to attracting customers to an area that has historically been a dead zone between the more popular State and Main streets.

The one holdup was the alley that goes from Washington Street to Liberty Street and runs along the west side of the Liberty Square. McKinley CEO Albert Berriz said it was co-owned by the city and McKinley. When the Planning Commission approved the project, McKinley had narrowed that alley way to 10-feet.

But Berriz told the council when he heard there was some community objection to it, he changed it back to its original 26 feet "in one minute."

"We are going to make a huge investment on this block," Berriz said. "We have been thoughtful. We have been very responsive." 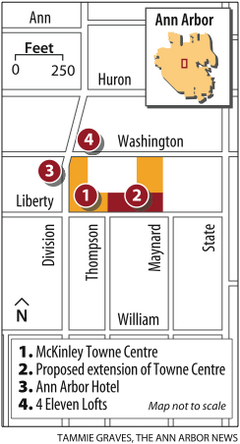 Berriz said that he envisions having tables out there and people eating along the alley and the plan is to "make that space quiet usable."

Some residents spoke during the meeting of creating an alley like the Nickels Arcade, the popular glass-topped, atrium walkway between Maynard and State streets that is lined with businesses.

Council Member Chris Easthope, D-5th Ward, said that isn't in the plans for now, but the project was important.

"It is another huge step in revitalizing that area," said Easthope.

"I think it (project) will be a very fine addition to our downtown," Hieftje said.

McKinley has aspirations to create a vital, thriving environment along Liberty Street, similar to Main Street. It bought the former TCF Bank building and transformed it into the McKinley Towne Centre, bringing in Google AdWords, the Bar Louie restaurant and other businesses.

Also in the vicinity of the Towne Centre is the planned Ann Arbor Hotel and 4 Eleven Lofts.

Note: This story has been adapted from material provided by Mlive.com from the Ann Arbor News.