'Deals of the Year' winners announced 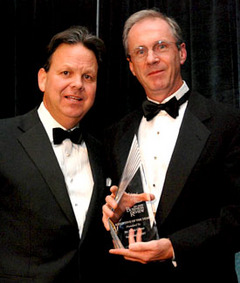 David Canter is the Ann Arbor region's Executive of the Year, accepting the honor at the "2007 Deals of the Year" awards gala presented Friday night by Ann Arbor Business Review.

Canter's honor was the final award of the event, a black-tie gala that culminated in the unveiling of top honors in 11 categories, all of which are key drivers of the local economy.

Canter, senior vice president for Pfizer and site director of its Michigan laboratories, was chosen for his exemplary leadership after the drug giant announced in January that it would close its Ann Arbor campus in 2008.

Because of Canter, the community remained calm and focused after the announcement. Business leaders stepped up to strategize on how to fill the void, and Canter has been a key part of the transition - while never wavering in his advocacy for Ann Arbor.

Canter received his award from Albert Berriz, CEO of McKinley and the 2006 Executive of the Year. 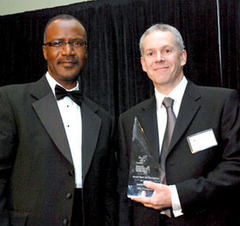 Robert Ramey / Ann Arbor Business ReviewNSF President Kevan Lawlor, right, and Michael Finney.
Also stepping to the stage in the grand ballroom of the Eastern Michigan University Student Center was NSF International, winner of the "Company of the Year" honor.

NSF was born decades ago at the University of Michigan, growing today into a $100 million global operation with headquarters in Ann Arbor Township.

In the past year, NSF invested $23 million in a new 82,000-square-foot lab that doubled its capacity and will create 100 jobs over three years. It also continues to open offices across the globe, including through acquisition of international firms.

Nine other winners earned honors from among 27 nominees. They were:

Finance: University of Michigan Tech Transfer office
The university signed a deal to give up future royalties for the nasal-spray vaccine FluMist in exchange for payments that could eventually total $35 million.

Manufacturing: Aernnova
The Spanish aerospace firm announced plans to open a $10 million engineering operation in Pittsfield Township that could eventually employ up to 600 people and give the region a boost in attraction more advanced manufacturing-related firms.

Nonprofit: HelpSource
The social services organization placed more than 90 percent of its 932 clients, as well as most of its services, in alternative agencies when it ceased operations this summer. The leadership behind the smooth transition ensured that the agency's social services would continue.

Technology: Accuri Cytometers
The life sciences firm secured $5 million in financing as it prepares for the commercial introduction of its Accuri C6 Flow Cytometer System. This product launch could alter the entire industry by bringing the cell testing devices to market with smaller and less expensive equipment.