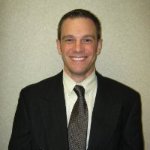 "Ted has a very keen understanding of what it takes to be successful at McKinley and he freely shares this knowledge with his teams," states Albert L. Berriz, Managing Director, Residential Real Estate. "Ted's intelligence and work ethic enable him to be an incredible problem solver and advocate for our customers," says Berriz.

Ted will assume his role as Regional Director, Operations in Florida in January 2013.