Tios Moves to Liberty - The story behind an 11th-hour save 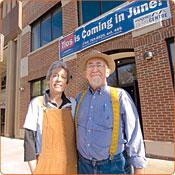 After twenty-three years on Huron Street next to City Hall, Tios Mexican Caf got the boot when the city bought the building last year. Owner Tim Seaver was scrambling to find a new space before his lease ends June 30, and he found one at the eleventh hourin a former Mexican restaurant, no less.

Seaver credits McKinley for making it possible. When the developers of McKinley Towne Centre heard he was looking for new digs, they asked if hed be interested in taking over the space recently vacated by Salsaritas Fresh Cantina on Liberty. We said, well, yeah, Seaver recalls, but we certainly cant pay what we think Salsaritas was probably paying. He says McKinley told him theyd been approached by several chain restaurants but didnt want another chain in there. They wanted a local place, and they made us an offer we couldnt refuse.

The new space is twice as big as the old one4,000 square feet compared to 2,000, which doubles the seating capacity from thirty-five to seventy. Its also twice as tallthe interior soars two stories to an exposed ceiling of beams and ductwork painted a sleek matte black. Tios will upgrade to match by providing table service in addition to take-out and delivery, as well as new menu items, including seafood dishes, steaks, and marinated chicken.

Seavers keeping some of Salsaritas touches, like the spectacular curved half ceiling suspended from the ductwork and painted to look like cloud-strewn blue desert sky. Hes also keeping the concrete bar because the citys already expedited a liquor license. If the state agrees and grants the license, Tios will stock a full bar. But Seaver stresses, Were going to be a restaurant with alcohol, not a bar with food.

Its a happy ending to what was threatening to turn into an ugly dispute between landlord and tenant. The city was delighted to find that we found a spot, because we were a thorn in their side, says Seaver, referring to his very public battle to get the city to help him relocate. City officials are anxious to put it all behind them. In addition to expediting the liquor license, they made a deal with Seaver to forgive his last two months rent if he was out by June 10.

For his part, Seaver admits the city didnt really have a free hand in helping him relocate. I understood that they did have some restrictions because they had to be careful what kinds of precedents they set, he says. But I still wanted to beat up on them.