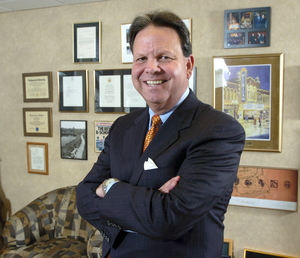 Across the U.S., McKinley added another 6,000 units to its owned portfolio, along with some key commercial buildings - like McKinley Towne Centre in downtown Ann Arbor.

Yet the company - which built its local reputation as a landlord - has quietly grown over recent years into an institutional real estate management company, adding both jobs to its Ann Arbor-based corporate headquarters and properties to the portfolio it manages for others.

According to a report from Real Capital Analytics, institutions - such as pension funds and life insurance companies - pumped more than $35 billion into the apartment sector in 2007. That followed a year when they invested an estimated $23 billion into the sector.

Those investors - led by many East Coast firms that control billions - look for long-term, stable returns.

Yet, said Berriz, theyre not looking to manage the properties.

And thats where McKinley steps in.

The first effort was in the late 1990s when McKinley was appointed receiver at the Villages of Taylor, a federally funded and troubled complex that the company turned around and still manages.

Locally, an early receivership by McKinley was the former Lake in the Woods in Ypsilanti Township, which McKinley managed until its eventual sale and rebranding as Lake Shore Apartments.

Today, the companys portfolio of managed apartments tops 20,000 units and more than 150 properties, bringing its total portfolio to more than 30,000 units. The company has also expanded into new states: It now operates in 20 states, all east of the Mississippi River, and excluding the northeast. Ten of those states were added in the last four years.

Some of the business is done for property workouts, or cases in which a lender takes a property back after a loan default. Other clients - like Berkadia and Freddie Mac- can look for longer-term management.

But McKinley does turn away work that doesnt fit its model: Berriz insists that a McKinley executive must be able to reach a property that it takes into its portfolio within a four-hour drive.

So the company has grown into Atlanta, Norfolk, Va.; and central Florida, while declining offers to work in Phoenix and Dallas. Its enough to generate $400 million in annual revenue.

The national investment climate that stalled commercial real estate deals in 2009 is starting to thaw, Berriz said. But the workout business isnt slowing down, even as recovery takes hold.

Berriz estimates that full national recovery wont be seen until 2013-2015.

And in the meantime, McKinley will continue to accept both temporary and longer-term assignments from its key customers. Today, its working on more than 150 properties; 26 were resolved.

Berriz says the company now can be described as a finanance-based, intellectual capital-based business.

Were managing our real estate in the way we manage our own real estate, Berriz said. Its run off the same platform with the same people. Its a great expansion of our brand.

It also benefits Ann Arbor as the company expands to 125 employees in its headquarters on North Main Street. Many of the new jobs come from three new departments, which account for a combined 30-plus new positions: Marketing, media and attraction; residential asset management; and commercial asset management.

Yet because McKinley keeps its headquarters downtown, growth in those three places is fueling growth in Ann Arbor, Berriz said.

That doesnt mean that McKinley is seeking more property in Ann Arbor. It wont sell assets here; however, Berriz said, we have a responsibility to diversify our balance sheet.

And purchasing property will be a secondary effort for the company moving forward. Today, its owned property is about one-third of its $1.3-billion portfolio. In coming years, that will drop to 20 percent.

The most likely scenario for McKinley on the purchase side is to join its clients in joint venture deals, he said.

The most important thing we value is our relationships, Berriz said. We deal with very large organizations. Their breadth is bigger than anything we could do. In the worlds were in, were the first person they think of.

Paula Gardner is Business News Director of AnnArbor.com. Contact her at 734-623-2586 or by email. Sign up for the weekly Business Review newsletter, distributed every Thursday, here.