RSS feed of this listing 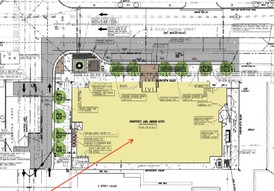 Dense. Vibrant. Prosperous. Those are three words commonly used describing downtown Ann Arbor. They also play key parts in the latest proposal to expand the McKinley Towne Centre to include a high-rise hotel.

The city is reviewing developer McKinley Inc's plans to build a nine-story, 120 room hotel on the southwest corner of Washington and Division streets. The project is expected to create 20 to 40 jobs while it's estimated patrons of the hotel will spend about $3 million a year in downtown. The idea is making the city's downtown core more dense will make it more vibrant and prosperous by letting those three factors, and others, play off each other.

"That type of critical mass is critical," says Albert M Berriz, CEO of McKinley Inc. "The convergence of those businesses there is critical. This is the only place in downtown where these things are coming together."

The building will replace a surface parking across the street from the Ann Arbor News building. The hotel's design will compliment the surrounding architecture. Parking for the project will be handed by the Liberty Square parking garage behind the Michigan Theater.

First Hospitality Group will develop and the run the yet-to-be-determined brand of hotel. First Hospitality operates about 40 similar hotels across the Midwest, such as the Hampton Inn on Plymouth Road.

The proposed hotel is the latest expansion for the McKinley Towne Centre complex, one of the most impressive urban redevelopment projects in Metro Detroit. The complex, centered on the intersection of Liberty and Thompson streets, has experienced a rebirth thanks to McKinley's efforts to turn the drab, concrete-themed, fortress-like block into a colorful, vibrant area that is full of businesses and open and inviting to pedestrians.

Among the other expansions underway for the complex are the redevelopment of storefronts along Liberty between Thompson and the Michigan Theater and the construction of the 4 Eleven Lofts building. This is on top of McKinley's initial step of the development, transforming the formerly profoundly ugly TCF Bank regional headquarters into the new headquarters to Google's Adwords division.

The Ann Arbor City Council is currently reviewing the plans for the hotel, the second hotel planned for downtown. McKinley hopes to wrap up project approval by the end of January and start construction shortly thereafter. Work is expected to wrap up 13 months after ground is broken.

Annual Toys for Tots campaigns are conducted each year throughout the nation from October 1st through December 24th. Since its beginnings in 1947, Toys for Tots has distributed nearly half a billion toys to close to 250 million children.

To support this years Toys for Tots campaign, new, unopened, unwrapped toys will be accepted at the following McKinley apartment communities through Friday, December 21st between the hours of 9:00 am and 6:00 pm:

McKinley, founded in 1968, is a well respected national real estate investment firm that owns and operates $1.8 billion in assets in 103 properties for its own account and for select clientele. This includes 17,248 apartments and more than 5 million square feet of commercial space located in 10 states. Headquartered in Ann Arbor, Michigan, Albert M. Berriz serves as Chief Executive Officer with 717 full-time employees nationwide.

McKinley is pleased to announce the successful disposition on behalf of our valued client Capmark, Inc. of River Oak, a 268 unit residential apartment home community in Louisville, Kentucky.

McKinley was appointed Receiver by the Jefferson Circuit Court in the Commonwealth of Kentucky and began management of the community in August 2007 improving operations and cash flow. A successful disposition was achieved this month.

This disposition is a recent example of how McKinley aggressively solves real estate challenges for our clients. From takeover to disposition, the McKinley team enjoys exceeding expectations for our partners and clients.

McKinley, founded in 1968, is a well respected national real estate investment firm that owns and operates $1.8 billion in assets in 103 properties for its own account and for select clientele. This includes 17,248 apartments and 5.0 million square feet of commercial space located in 9 states. Headquartered in Ann Arbor, Michigan, Albert M. Berriz serves as Chief Executive Officer with 717 full-time employees nationwide.